I am currently sitting in my hostel recovering from a busy past few days in the beautiful city of Barcelona! What can I say about this lively and international city? It has good food, fun people and the best art. The one thing that stood out most to me on this trip was artist Antoni Gaudí. His work is EVERYWHERE in this city!!

On my first full day in the city (after recovering from some jet-lag), my new friend (Kelsey) and I set out to explore. We both stayed in a hostel called Factory House in the region of Gracia. Living out of a suitcase these past few days has been tiring but worth it! If you are looking for a cheap place to stay in Barcelona, I recommend this hostel. However, it is very small and there is no “backpacker social life” that you find in other hostels.

Since our first day was so beautiful, Kelsey and I decided to visit the beach! The Mediterranean was warm and blue, and the little bars and restaurants along the water have great views. Although their menus are a little more expensive, the relaxing vibe is worth getting a drink or some tapas there!

Later that evening, we were able to visit Park Güell. In the early 1900’s, this area of Barcelona was originally a rocky hill and an unsuccessful  housing site, until Gaudí was commissioned by Eusebi Güell to build modern houses in an open-air atmosphere. Although only two houses were built there, Gaudí had transformed the area. It was open to the public in 1926 and is now deemed a World Heritage site by the United Nations. Some of the famous parts of the park include the mosaic benches, which curve like a serpent. In my opinion, this is one of the best views of the whole city! Gaudí lived in one of the two houses on the hill with his family. The house is now open as a museum within the park.

Park Güell consists of two areas, one which is open to the public, and the other which costs 8 euros. Both are equally beautiful, but to see Gaudí’s famous mosaic bench and house, that is in the area you have to pay to get into. If you are planning on visiting Park Güell, I recommend buying your tickets online or going a day early to buy them in advance. You can choose a time you wish to enter the park. Once you enter the park, you can stay as long as you like. We went around 6pm and it wasn’t as busy. The sun was beginning to set, causing a pink and blue glow in the sky, which was incredible!

Sticking with the Gaudí theme, on our second day we also visited La Sagrada Familia, Las Ramblas and Casa Batlló while in the Gothic area of Barcelona. Casa Batlló is another famous building designed by Gaudí. It is different than other buildings in Barcelona due to it’s curving sides, arched roofs and colorful mosaic tiles. We did not have time to go in, but it is worth checking out!

While in the gothic area, we also visited Las Ramblas, a long pedestrian road that leads to the water. It is a great place to check out (but I must warn you that it’s very crowded and a great spot for pick-pocketers, so always be aware of your bag and wallet.)

We also visited a huge market which is on a side street from Las Ramblas: Mercado de la Boquería. If you are in the mood for some fresh fruit, or just interested in seeing how much jamón (ham) there really is here, then it’s definitely a great stop. I was able to get fresh strawberry-pineapple juice and it was the perfect afternoon drink! 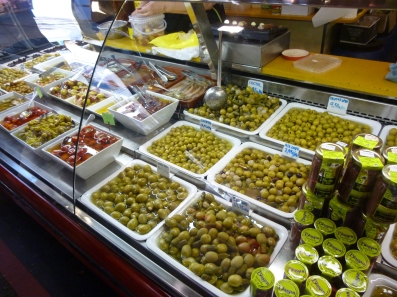 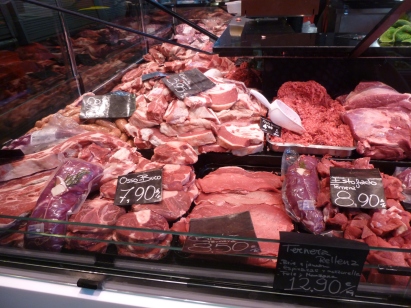 Finally, La Sagrada Familia was number one on my bucket list while visiting Barcelona, which is why I saved the best for last in my post. I’ve been to many cathedrals and basilicas’ before so I was interested in seeing how this one compared. But let me tell you–it can’t. It’s completely in it’s own category of beautiful. La Sagrada Familia is very different from the “old school” Cathedrals I am used to visiting in Spain. This masterpiece began construction in 1882, with Gaudí heading the project. When Gaudí died in 1926, less than 1/4 of the Cathedral had actually been built. To this very day, the Cathedral is still not finished and construction continues! In 2010, Pope Benedict XVI visited La Sagrada Familia and consecrated it as a Basilica in the Catholic Church. From my research, it is predicted that the project will finally be completed by 2026 (100 years after Gaudí’s death)! But no one can know for sure.

There are no words to describe the magnitude of La Sagrada Familia and the awe you have while standing in front of it, staring up. No picture can do truly do this building justice. The stained glass inside is incredible. We happened to be there at the right time of day (12-1pm) and the light was shining in creating a rainbow inside the church. Truly incredible!

Again, if you are planning on visiting Barcelona, definitely order your ticket online to see La Sagrada Familia. It costs 15 euros, or 19 euros with a tour guide. You can choose your time, show-up and skip the lines! And trust me, the lines were very long! (La Sagrada Familia tickets)

The night after my conference, I wanted to check out the Magic Fountain of Montjuïc for the light show. I went with my new Irish friend, Niamh (pronounced Neave) who was a part of my program. Little did we know that we were stumbling upon a huge festival in Barcelona called La Mercé. The fountain is located at the top of a hill near Placa d’Espanya. There were a lot of people gathered and we found out they were lighting off fireworks for the celebration. We decided to stay for most of the show before escaping early to beat the crowds. Let me tell you: Barcelona knows how to celebrate. This was the most incredible firework show I’ve ever seen, set to upbeat Spanish music, proclaiming pride for Catalan and Barcelona! I couldn’t believe the number of people there were.

Overall, Barcelona truly impressed me. Although I was only here for 4 short days (one day spent at a conference with my program), I had enough time to see what I wanted to. If you are planning on visiting Barcelona for a short amount of time, I suggest getting a metro card with 10-rides (9 euros) on it or the 3 day pass (24 euros), depending on how much you will use it. Although I walked a lot, Barcelona is a huge city and you do need public transportation to get from point A to point B most times. Park Güell and the beach are very far apart! The metro system was also relatively easy to use and understand. Ask your hotel and hostel for a map that shows metro lines and stops!

I know this was a long post, but Barcelona is a city that has a lot to offer. Tonight, I am flying to Sevilla to meet up with Mark and spend the weekend there before heading on to Algeciras to meet my host family!!

Hope you enjoy the video blog!!