Hey everyone! Two weeks ago we had some family visiting us in Spain and we were able to take a day trip with them to the city of Cádiz! It is easy to get to from Sevilla to Cádiz, by bus or train (about an hour 1/2) for around 22 euros, so it makes for the perfect day trip.

The title of this blog is Cádiz, Cádiz because not only is Cádiz a city in Spain, it is also an entire region. We learned from our tour guide that when you want to express that you are visiting the city, you must repeat yourself and say “Cádiz, Cádiz.” The city itself is one of the oldest inhabited cities in Europe! To learn more about the region of Cádiz, check out one of our old posts here: Exploring Cádiz for the weekend, where I visited Vejer, Jerez and Tenerife with my host family. 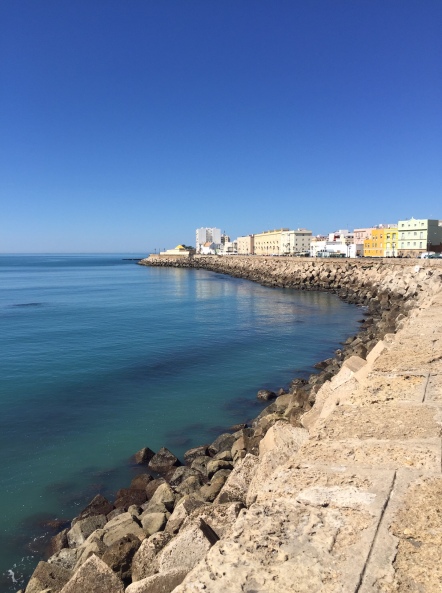 Although this trip was not our first time in Cádiz, it was our first time on a Segway! Since my Aunt and Uncle were visiting, they suggested we do a Segway tour, since they had done them before in other places. (It costs about 29 euros per person, plus an extra 30 euros if you want a tour guide). It was such a fun experience and I highly recommend doing a tour of Cádiz if you have the time / money. The company also rents bikes (for those on a tighter budget).

There are many beautiful sights to see in the city, which we visited while on the tour! We learned that Havana, Cuba was modeled after Cádiz. That is why the James Bond movie, Die Another Day filmed some scenes there. Does the picture below look familiar? Maybe you recognize it from the scene when Halle Berry emerges from the water. Here’s a link to the scene I’m referring to! You’ll see that it’s the same place.

There are also two famous fortresses in Cádiz along the water. To visit Castillo de San Sebastián, be prepared to walk a long jetty out to the castle. Sometimes to the waves crash over the walkway, so be careful. The views are totally worth it though!

The second fortress is called Castillo de Santa Catalina and is on the other side of La Caleta beach from San Sebastián. This castle is much closer to land than the first and provides great views of La Caleta beach.

We learned on our tour that most of the walls, castles and churches in Cádiz are made from a special type of stone made with shells and rocks from the sea, giving it a unique texture and look.

Cádiz is also famous for its seafood. We ate lunch at a place called Las Flores, which is located in Plaza de Las Flores (recommended to us by a friend who is from the area). We suggest trying Cazón en adobo (sand shark marinated in vinegar and cumin, then fried). I’m not a big fish person and I even enjoyed this dish!

The first time Mark and I visited Cádiz together, our friends had Mark try camarones. I was too freaked out by their appearance to try one but Mark did! (To see the evidence, check out our video blog at the end of this post!) 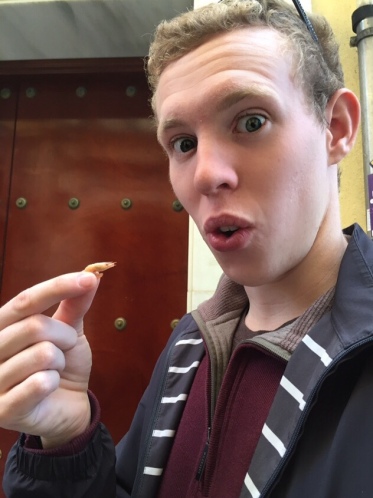 After our tour was finished, we decided to head back to Las Palmas, an area in Cádiz that was celebrating their day of the Virgin (Nuestra Señora de la Palma Coronada). We were lucky enough to catch the procession of the Paso through the streets. (A Paso is a very ornate and old platform, usually decorated with candles and a statue of Christ or the Virgin which is carried through the streets in Spain). Typically you see Pasos in the South of Spain the week before Easter (Semana Santa). However, a city will have a parade through the streets with the Paso and a band if it is a specific holiday.

To end our day, we had drinks at a rooftop bar in Hotel La Catedral and watched the sunset behind the Cathedral. It was a beautiful day to explore Cádiz. We always discover new things about this city each time we go! Big thanks to my Uncle & Aunt for visiting us in Spain!! 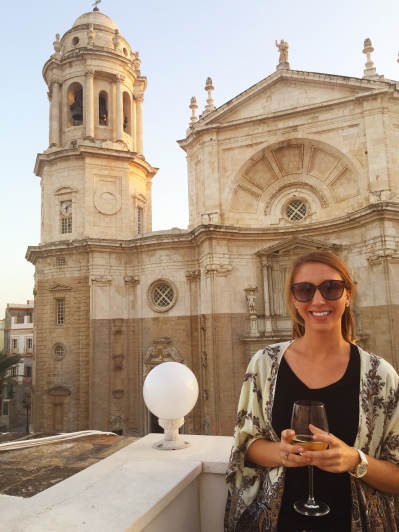 Check out our video blog of our Segway Tour in Cádiz!