Hey everyone! Last week we had two days off from work and decided to spend our long weekend exploring some cities near Madrid. After a 6.5 hour overnight bus ride (the things you do for travel, ha) we were groggy but excited to get started.

Since we couldn’t check into our Airbnb until 1pm, we decided that our best bet was to lock our luggage in Madrid’s Atocha Train Station and start our day! (We stayed at La Casa de Mito, a private room and bathroom we found near Atocha Station for 36 euros a night. It was perfect for what we needed). After getting lost in the train station, changing / doing makeup in the bathroom, and navigating the metro to Moncloa Bus Station, we were ready for our day trip to Segovia! (No, I’m not talking about Genovia where Princess Mia lives!)

It’s fairly easy to get from Madrid to Segovia, by either train or bus. We opted to take a bus, since it was cheaper. You can buy tickets for 16 euros round trip through La Supulvedana Bus Company, which departs from Moncloa Station. They drop you off about 10 minutes walking distance to Plaza del Azoguejo where you can find a tourist office and get a free map of the city. You can see the Roman Aqueduct in the distance from the bus station, so just walk in the direction of that to get to the center! Segovia is very small and once you are in the city it is easy to get everywhere by walking. Before we arrived, we were both able to squeeze in another nap on the bus!! I’m not exactly sure how we made it through the day, but aside from one bloody nose (I was sick that weekend), we managed to see everything we wanted!

When you first arrive in Segovia, one of the first things you see is the Roman Aqueduct in Plaza del Azoguejo. The Roman Aqueduct is one of the most impressive things about Segovia. This aqueduct is over 2,000 years old and is still a functioning aqueduct bringing water to the city! Yes, you heard that right, it still works! It is one of the best preserved ancient monuments in Spain. The entire city of Segovia was actually deemed a UNESCO World Heritage Site in 1980! Pretty cool!

After spending some time around the aqueduct and snagging a map at the Tourist office, we decided to head towards the Cathedral and Jewish Quarter. Although we didn’t go into the Cathedral, it’s possible to go inside for 3 euros. It’s one of the last Gothic style Cathedrals to be made in Spain and is actually the sight where Isabella I was proclaimed Queen of Castile!

After making it to the Cathedral and Plaza Mayor we decided it was time for an early lunch. Since it was only 1pm, restaurants were just beginning to open (in Spain, lunch is between 2-4pm).  Many places offer “Menu del Dia” in Segovia, where you can have a starter, entree, dessert and drink for a set price, usually between 15-30 euros a person. One of the most famous dishes in Segovia is called Cochinillo Asado, which is a roasted suckling pig. Unfortunately, we didn’t try the cochinillo but we did hear good things about it.

Since we were on a budget, we decided to grab some tapas for lunch instead of a more formal meal. We ate at a place called DVinos, which offered 28 unique tapas options (located about 2 minutes from Plaza Mayor). You could choose a tapa and caña (small beer) for 1.70 euros, and each additional tapa was 1.10 euros. They had a variety of options and our bill came out to only 11 euros! It’s definitely a great place to try if you’re visiting Segovia on a budget! 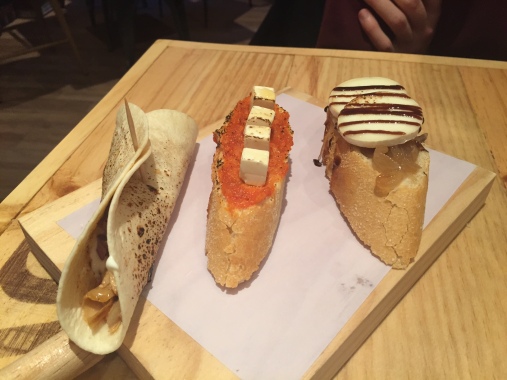 After eating lunch, we headed out in search of the Alcazar. This building sits on the edge of a cliff, protecting the old city. It was first used as a fortress and then as a Royal Palace. In the 1800’s it was a military academy…and now it is a museum for people to visit!

After finishing our visit at the Alcazar, we headed back towards the city center to catch our bus back to Madrid. Although there are some other things to do and see in Segovia, we found that with only one day in the city  you can see most of what you need to!

In 4 short days we will be back in the USA to celebrate Christmas with our family & friends! Stay tuned for our post about our day trip to Toledo after the holidays. We hope you enjoy this video blog about our time in Segovia!

2 thoughts on “A Day in Segovia”