Hey everyone!  Now that the craziness of the holidays are over, we want to share with you our day trip to Toledo. At the beginning of December, we had a long weekend where we traveled to Madrid. From there, we decided to take two day trips, one to Segovia and the second to Toledo! Lucky for us, the ALSA bus company runs frequent trips (every half hour) from Bus Station Plaza Eliptica in Madrid to Toledo (about a 45 minute journey). It costs around 13 euros round trip. (There are trains that you can take to Toledo, but the tickets are more expensive). Even though we bought our tickets online ahead of time, most people seemed to have bought their tickets at the station to catch whichever bus they could. We ended up getting on a bus that left a half hour earlier than the one we purchased our ticket for, so if you get to the bus station earlier than planned, I definitely suggest getting in line!

Before we get too much further into this post, you should know that Toledo is really Holy! It was known as a city of tolerance throughout history because it was a place where Christians, Jews and Muslims lived together in peace for centuries. There are many places of worship in Toledo, making it a very Holy city still to this day. (Every wondered where the expression “Holy Toledo” came from?) It is known as the city of three cultures because Arabic, Jewish and Christian influences can be visible throughout Toledo. It is a UNESCO World Heritage sight and feels as though you’ve traveled back in time when you wander the narrow streets!

When we arrived in Toledo, we had to walk 15 minutes to the town center. The old city sits high on a hill, but luckily there are escalators to take you all the way up! When we first arrived in Plaza Zocodover, we visited the tourist center to get a map. After getting some advice from the people in the tourism office, we headed over to buy our Zoco Train tickets. The Zoco Train is a small train that drives through the city with an audio tour. It costs 5.50 euros a person and lasts 40 minutes. Although the audio tour is nothing to get too excited over, the reason we took this train was to get to the Mirador de Valle (a beautiful lookout point of the city).

Since we only had a day, the hour long walk to get up to this viewing point wasn’t in the cards for us, so we settled for the train. I wouldn’t recommend the Zoco train for anything BUT getting to the top of this viewing point (unless you have kids). The audio guide is informative but the train ride is nothing special. They stop only once on the tour and it’s for 5 minutes to take pictures at the Mirador de Valle. If you have more time in Toledo, there is a public bus (#71) that runs every hour and costs 1.40 that stops at this viewing point! The only problem, is that you have to wait another hour for the next bus to come (which we didn’t have time to do)!  I would recommend taking the bus and bringing some wine/food to enjoy if the weather is nice. There are benches and places to sit, which would be perfect to have a nice lunch while checking out the view for an hour. If you do choose to take the Zoco Train, try to sit on the right side!!! Most of the best views are on the right!

After our Zoco Train tour, we headed out in search of lunch. Toledo also has many restaurants (like Segovia) that do their “Menu del Dia” for a starter, entree, dessert and drink for a set price. Although I had looked up some recommendations online before going, we ended up picking our own place to go called Don Diego Meson. The food was nothing spectacular, but it was a good amount for the price (15 euros a person). Mark had paella, beef and cheesecake and I tried the garlic soup, chicken and chocolate mousse!

After lunch we set out to explore everything this holy city offered (literally). We headed towards the famous Cathedral first. (It costs 3 euros to go inside with an audio guide). Instead of paying to go in, we entered through the side of the church where you can pray/visit for free. If you are a first time visitor to Toledo, I would recommend paying to go inside the Cathedral since you are able to see much more of it and learn about its history. It is truly incredible, and the gold Altar is stunning!

After finding the Cathedral and walking around the outside a bit, we decided to visit some other holy places. Earlier in the day we had discovered that there is a Tourist Bracelet you can purchase for 9 euros that gets you into 7 places around Toledo. The cost to go into each of these places without the bracelet is 2.50 euros each (so 17.50 euros if you wanted to visit them all without the bracelet). The bracelet doesn’t expire, so you can use it if you are there for a few days! We thought this was a good deal and decided to try to visit all the places on the list. (After only a little bit of running,  we managed to see all the places AND catch our bus back to Madrid on time!) Our two favorites were the Monasterio de San Juan de los Reyes and the Iglesia de Los Jesuitas. If you don’t have time to visit them all, be sure to check out these two places! (We actually visited these two last and almost skipped one due to time, but luckily we didn’t!) Here are some pictures and info for the 7 spots our Tourist Bracelet let us visit! 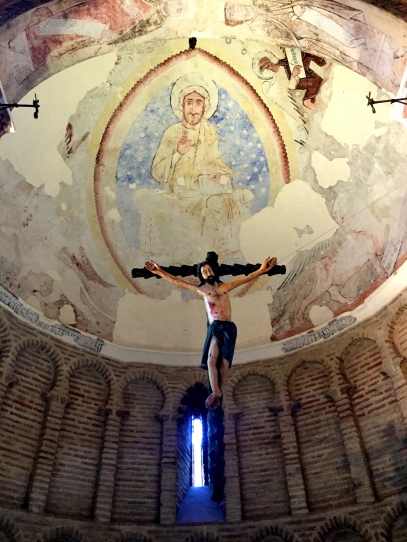 The first place we visited (where we bought our bracelets) was the Mesquita del Cristo de la Luz. This is actually the oldest building in Toledo, built in the 10th century. First it was a Mosque and then converted into a Church when the Catholics reconquered Spain. You can see in the picture the pointed arches behind Jesus are of Arabic style (a unique blend of cultures).

This was once a school for noble women. They would live, study and pray at the school until they were married.

This is considered the oldest Synagogue in Spain. It is thought as a symbol of the cooperation and peace between the three cultures during the Middle Ages in Toledo. 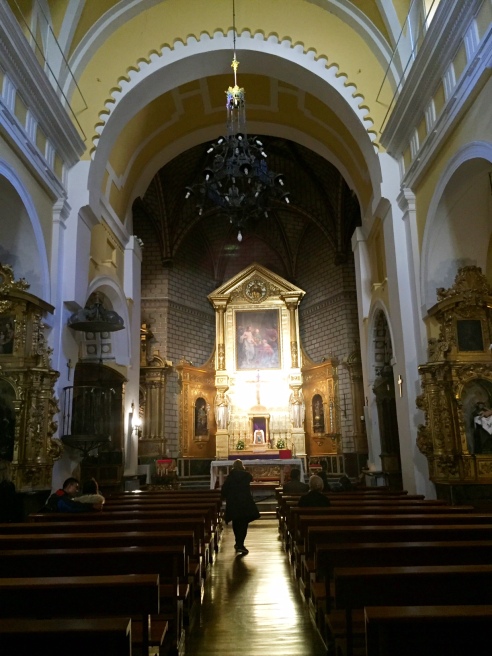 This Church is famous for being home to El Greco’s painting The Burial of Count Orgaz. I liked this Church because a stained glass window allowed light to shine directly onto the Altar. It looked as though the cross was glowing!

This Church was also once a mosque before the Catholics reconquered Spain. You can see the Arabic style arches to the right of the picture. There are ruins under the Church that you can visit by climbing down some stairs to the left of the door. Be careful you don’t hit your head though, even I had to duck when going down!

The first thing you notice when looking at the outside of the Monastery are all the chains hanging on the sides. When Queen Isabela I and Fernando II reconquered Granada from the Moors (the last city to fall in the Reconquest of Spain), they brought the chains that were once used on the Catholic prisoners and hung them on the walls of the Monastery. 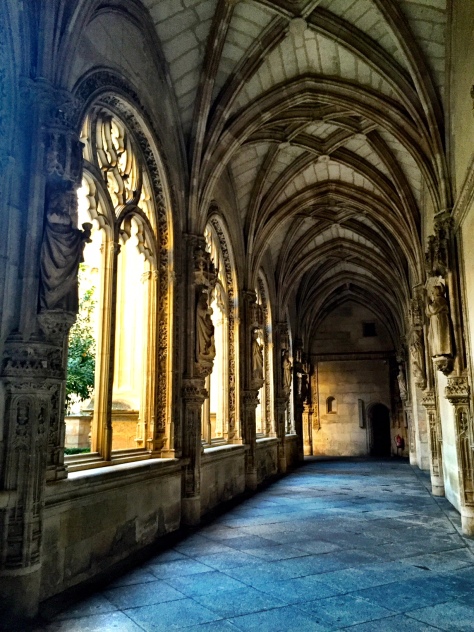 When you enter the Monastery, there is a beautiful garden/ patio enclosed by four hallways. I loved walking around this area. We were even able to hear monks singing!

Finally you enter the Church and see these high arched ceilings!! It’s one of my favorite buildings in Toledo because of how beautiful it is! 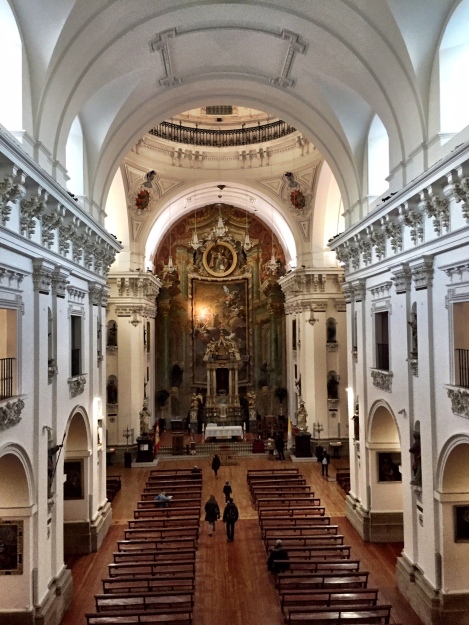 Last but not least, this Church is also another stunning place to visit in Toledo. However, it wasn’t the inside that we liked the most, but the view from on top of it! When we first arrived, we thought we would run into the Church, look around quickly before heading to catch our bus (this was the place we almost skipped). But upon entering, the woman at the desk suggested we climb to the top of the tower before the Church closed at 5:45pm. All day we had been talking about finding another great view of the city, closer than the Mirador del Valle! We thought that this was our chance and we hustled to the stairs to climb up!! Unfortunately for me and my fear of heights, the stairs in this Church aren’t very friendly (since you can see through them while you walk up)! However, with the help of Mark’s encouragement, I managed to make it to the top. There are two small towers on the roof of this Church, and the first you arrive to is gated in, so the view is a little obstructed. However, there is a walkway outside on the roof that you can cross for some amazing photos. You can see in the picture below where I hung out while Mark braved the walkway to take pictures! 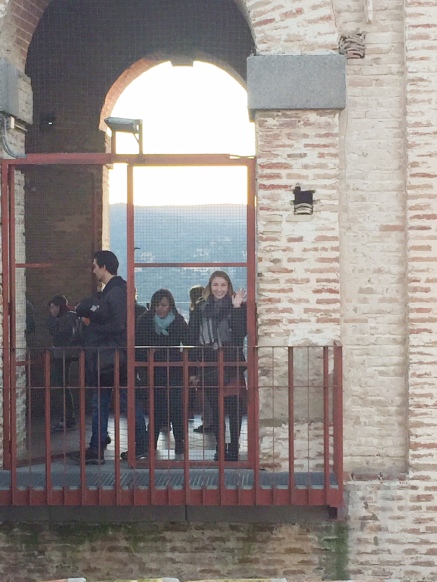 Even though we almost missed this one, we seemed to have visited at the perfect time: golden hour! Check out some of these amazing pictures of Toledo at sunset.

Luckily for me the stairs were easier to walk down than up! We quickly hustled from the city center to the bus station in a short 15 minutes and caught our bus back to Madrid in perfect timing!

Toledo is such an incredible city with so much history. We found the Tourist Bracelet to be perfect for our day trip. (Some places only take about 10-15 minutes to visit, since they are smaller, so it is possible to see everything in one day if you plan accordingly!) Toledo has always been one of my favorite places in Spain (since first visiting in 2009 when I was a sophomore in high school, and then again in 2014 when I studied abroad). It reminds me that peace is possible between people of different religions and backgrounds. If only the rest of the world could take note!!

PS. Check out our video blog from our trip!!

One thought on “Holy Toledo”