Hey everyone! Believe it or not we are still working on sharing some stories from our Croatia trip but we’re nearing the end. After departing Split, we headed South to Dubrovnik. Before we dive into that magical city, we wanted to share somethings about a side-trip we took while there. One place on our list during this trip was to visit Kotor, Montenegro. It’s a small, fortified town on the bay of Kotor. (We also thought it would be fun to check another country off our list since it was so close). 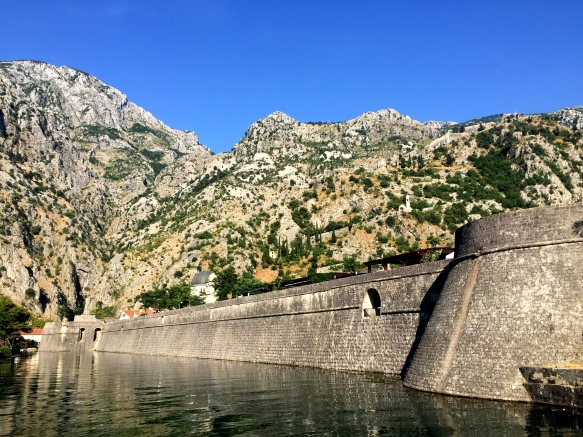 It’s about 2 hours by bus and there are typically a few options daily departing from the Dubrovnik bus station. It typically costs about 15-18 USD each way. You can order your tickets online ahead of time, or purchase them at the bus station.

Kotor has a unique history. It was  part of the Venetian Republic from 1420 to 1797, which is when most of the cities fortifications were built. A lot of the architecture in the old town is reminiscent of Venice as well. After that, it was ruled by the Hasburgs, followed by Napoleon. In 1918, Montenegro became part of Yugoslavia. In 2006 they declared independence. Montenegro is still the newest fully recognized country in the world! (Crazy, right?!)

When we first arrived in Kotor, it was a short walk from the bus station to the old town. Although it was fairly early in the morning when we arrived (around 10am) the temperature had already reached the high 80’s. We had been eager to hike the fortress in the mountain, so we set off immediately to do that before it could get any hotter.

We had read there is typically a 3 euro charge to climb the fortress. When we had arrived at the entrance to start our climb, there was no one there. It’s quite possible no one thought anyone would be crazy enough to hike in this heat, yet there we were. It’s 3 miles (4.5 km) up & down. I would love to tell you that we were triumphant in getting to the top of the fortress, however, most of the walk (we quickly realized) was in the sun and the temperature had already risen well into the 90’s. The humidity and incline of the hike were against us. We made it high enough to get a nice view of the old town and the bay of Kotor. I can only imagine how much more incredible the view would get if you continued on.

Completely dripping in sweat, we descended back into the old town to find a place to eat (with air conditioning). We found Bokun (a snack bar which we had read about during our research) and luckily they had cold beer and air flowing. They have a variety of simple snack foods, including small pizzas and charcuterie platters.

After cooling off in Bokun, we decided it was time to explore old town. One of the main points of interest was the Cathedral of Saint Tryphon. You can go inside and walk around. It’s quite simple for a cathedral but beautiful nonetheless. (Note in the picture below how everyone else is hiding in the shade).

We also spent some time winding through the quaint (and shaded) streets. We were able to visit a few local shops where we found some beautiful handmade items (including a Christmas ornament for our collection).

After some more walking, it wasn’t long before we were sweating again. We stumbled across an ice cream vendor and each got a cone (1 euro–what a steal) to try and cool off. (Less than an hour later, we went back and bought 2 more ice cream cones–EACH. No regrets, it was really that hot).

Kotor is most famous for it’s Bay. Now, a lot of cruise ships are stopping here so during the day the old town can be very busy. You can find a schedule of when cruise ships will be docking in Kotor online here. This is helpful to look at when planning a trip there to avoid the crowds. The Bay of Kotor is the most in-land part of the Adriatic Sea.

We ended our day at a bar that had outdoor seats, with large fans blowing mist. In yet another failed attempt to keep cool, we ordered some delicious mojitos and spent the remainder of our time people watching. Although our visit was short (and slightly hindered by the heat), we really enjoyed Kotor. The old town feels as though you’ve stepped back in time and the views of the mountains and bay are incredible.

Catch ya on the flip side! Amanda