Hey there again! While staying in Dubrovnik, we made a point to take a day trip to the Island of Lokrum.

The island of Lokrum is off the coast of Dubrovnik. It is currently uninhabited, though receives many visitors throughout the day. There is a ferry that can bring you to the island from Dubrovnik’s old port for about 40 kuna (5 euro). In the summer months the ferry leaves every half hour, but in the off season it’s less frequent.

We had so much fun on our day in Lokrum. It’s something you can’t miss when visiting Dubrovnik. The island is much quieter than the bustling city (there are no cars there). There are lots off shaded paths to explore that lead to incredible swim spots.

Our first stop when arriving to the island was the benedictine monastery. Our alma mater, St. Anselm College, was founded by benedictine monks, and still has a monastery on campus. This intrigued us, since it touched a very special place in our hearts. The monastery was founded in the year 1023. In the 12th century, a French general ordered the monks to leave the island. Upset by this demand, on their last night on Lokrum, the monks ceremoniously marched around the island, with candles facing down (dripping wax on the earth). They chanted that “whomever claims Lokrum for their own personal pleasure shall be damned.” The following morning, they left the island–never to return.

According to this legend, every aristocrat or person to have claimed stake on Lokrum has died in some mysterious way (drowning, suicide, killed). Now, the monastery is part in ruins and no human inhabits the island. Lokrum is the home, however, to some magnificent peacocks (who were brought over by Maximilian from the Canary Islands). 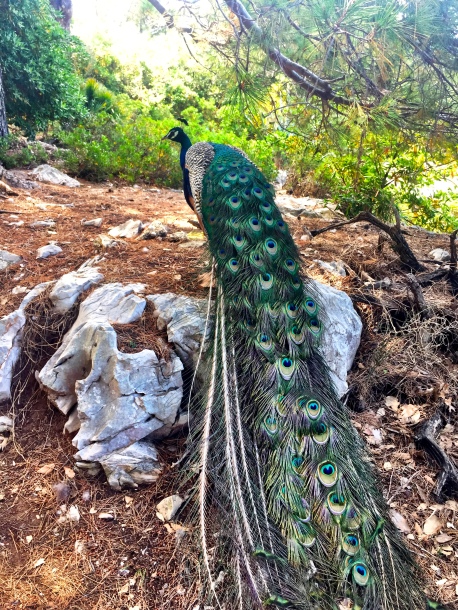 After exploring the monastery, we headed to a Game of Thrones exhibit we had read about online. Since Dubrovnik is the set for a lot of scenes in King’s Landing, the crew left behind an Iron Throne as thanks to the residents of Dubrovnik. You can watch behind the scenes videos of them filming in different locations throughout Croatia, Spain & Ireland but the best part is getting to sit on the Iron Throne. (Which we had a photo-shoot on, naturally).

Despite being fairly shaded, the heat was already starting to rise on the island and it was time for us to find a swimming spot. Our first stop was the Dead Sea (a salt water lake on the island).

Like the Adriatic sea, the water in the lake was crystal clear but rocky. It’s fairly deep when you swim out to the center but so refreshing after walking around the island. There’s a small cafe near the Dead Sea where you can grab a bite to eat or have a drink. Since we were on a tight budget we had packed a lunch to enjoy in the shade. Even the peacocks like hanging out in this spot. 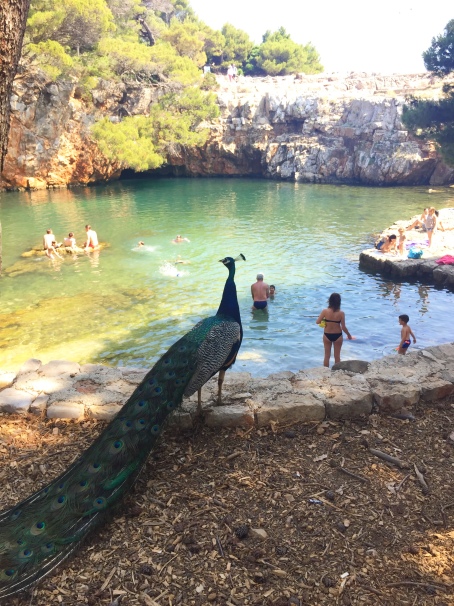 After eating our lunch & cooling off, we were eager to explore more of this magnificent island. There’s a playground, volleyball court and even small soccer field not far from the Dead Sea where some children were playing. You can also rent cushioned chaise lounge chairs for the day in a shaded wood area, not far from the sea. 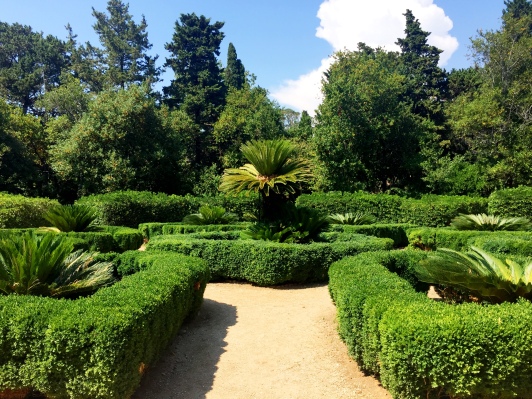 While en route to Fort Royal Castle (the highest point on the island), we stumbled across the botanical gardens. With different types of plants, trees and bushes, it’s a wonderful area to stroll through. There are also some other eating spots close to here.

Despite our *best effort* to hike up to Fort Royal castle, the crystal clear coastline was calling our name. It wasn’t long before we hiked down some of the rocks to find a quiet swimming spot. We’ve mentioned this before but it’s very helpful if you have swim shoes when visiting Croatia–or be prepared to hurt your piggy-toes. (We unfortunately, did not have these type of shoes & our feet paid the price).

Without realizing at first, the swim spot we chose was also the spot for a few nudists–I’m talking completely nude. It’s not something we haven’t experienced in Europe before so we were fine with it. They went about their day and we went about ours.

We spent the entire day at Lokrum. It was definitely a highlight of our trip. Check out our video blog below and stay tuned for our final post in our Croatia journey: Dubrovnik!

Catch ya on the FLIP side! Amanda