With tapas, open plazas and world renowned museums, Madrid is the capital city that keeps on giving. Stroll Gran Via for the best shopping, row across the pond in Parque Retiro and admire the 3,000 roomed Royal Palace. 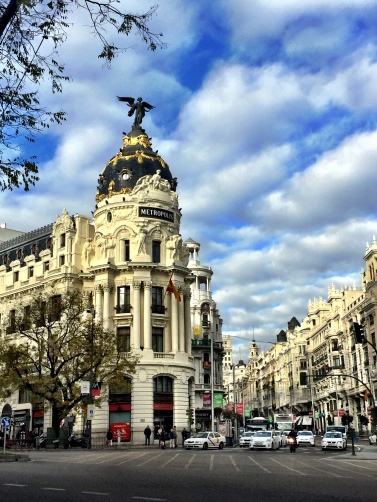 As you know, Spain holds a special place in our hearts since living there for 2 years. Madrid was actually the first place I ever visited in Spain so it was my introduction to the country. As the capital of Spain, Madrid offers plenty of historic and beautiful sights to visit. Check out our top things below:

El Prado is one of the top art museums in the world and is known to have some of the most famous European art. Specifically, Francisco Goya, El Greco & Diego Velázquez are all featured in this museum as some of Spain’s favorite artists. Tickets only cost 15.50 euros (or 40 euros if you’re interested in a guided tour), so even if you’re not a big museum fan, it’s worth a walk around for an hour or two. When you buy a ticket, it’s valid for 9 months so you don’t have a set date or time to use it. You can pre-purchase your tickets online here. 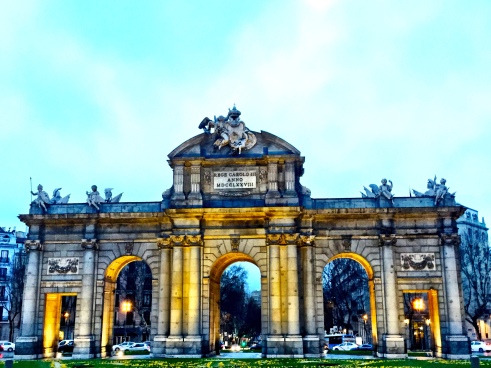 The Puerta de Alcalá is a free place to visit in the city. We love this because the town we lived in was called Alcalá de Guadaíra so it’s like a little piece of home in Madrid. (Alcalá means gate). It’s known as the first post-Roman arch built in Europe (even older than the well known Arc de Triomphe & Brandenburg Gate). It is meant to be the entrance to the city of Madrid and is located near Parque Retiro. 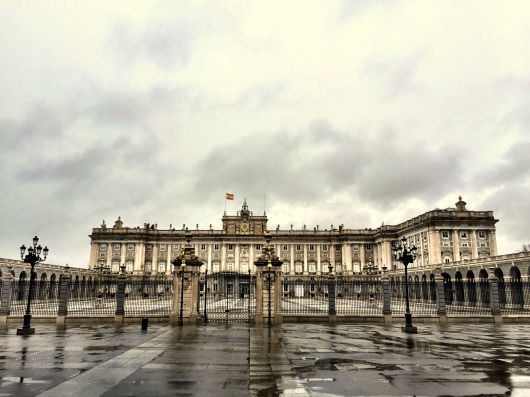 The Royal Palace is the official residence of the Spanish Royal Family in Madrid. It is currently Europe’s largest functioning palace, boasting 3,418 rooms! It costs 36 euros to visit the Palace and includes a guided tour. You can pre-purchase your tickets online here. 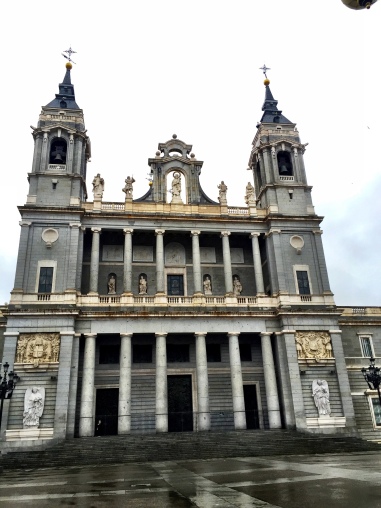 Facing the palace, you can find the relatively new Almudena Cathedral. Although construction began much earlier, it was halted due to the Spanish Civil War and not finally completed until 1993. Santa Maria de la Almudena is one of Madrid’s patron Saints. Entrance inside the cathedral is free so if you don’t have time to go inside the Palace, this is something you can quickly check out instead!

Madrid is also home to a lot of beautiful plazas that can be visited for free! Put on your walking shoes and hit the city to check out its architecture and public spaces. Plaza de España is one of those places you’ll probably end up stumbling across during your time in Madrid anyways. This Plaza can be found at the end of Gran Via (one of the main shopping streets). In the middle, there is a huge statue dedicated to Miguel Cervantes (author of Don Quixote). 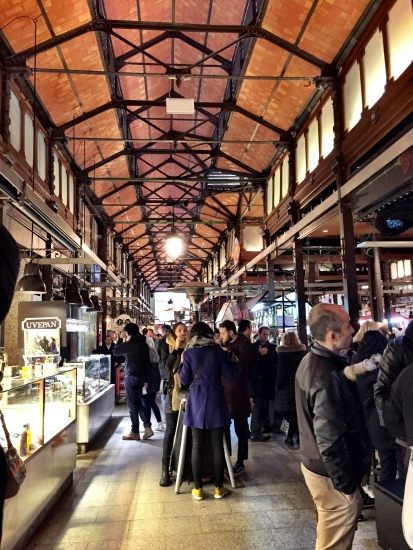 It’s always good to visit a market when exploring a new city and get a taste for the food and culture.  Madrid’s Mercado de San Miguel is not only a beautiful place to walk around, but also an ideal location to grab some cheese or fruit before heading to Parque Retiro for a picnic.

Parque Retiro is Madrid’s largest public park. Inside, you can find a large pond where you can rent a row boat for a few euros to take in the sights. On a summer day, it’s the perfect activity to soak up the sun. If you don’t have as much time, it’s still worth a stroll through the park to find the Palacio de Cristal (Crystal Palace). Built in 1887, its original purpose was to be a green house. Today it’s used for exhibitions and is often free to go inside. 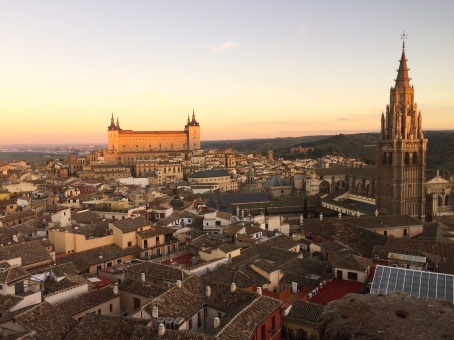 If you have enough days in Madrid, it’s worth getting outside of the city center and exploring some smaller parts of central Spain. One of our favorite places in this region is a town called Toledo. It’s about a thirty minute bus ride from Madrid and truly feels as though you have traveled back in time. For more information on Toledo (how to get there and what to see), check out our previous post here. 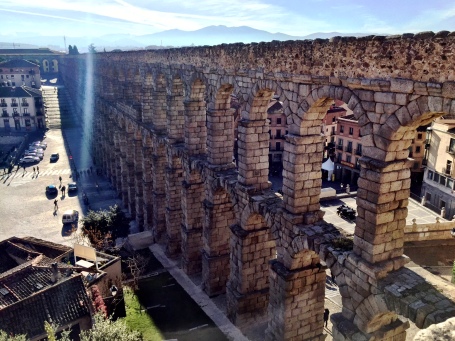 Similar to Toledo, about an hour from Madrid you will find the charming city of Segovia. It’s home to a 2,000 year old (functioning) Roman aqueduct! You can also visit the Alcazar, one of the palaces Walt Disney drew inspiration from. For more info about taking a day trip to Segovia, check out our post here. 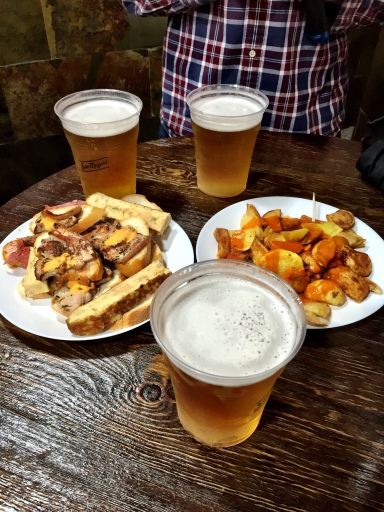 One of our all time favorite things to do in Madrid is to go to El Tigre. It’s one of the few places in Spain that still does tapas the traditional way. When you get inside, all you have to do is order a drink and they will give you tapas to go with the drink (picture lots of patatas bravas, tortilla and jamon). The more drinks you order, the more tapas they bring! You are not charged for the food, only for the alcohol – which is actually reasonably priced considering the deal you’re getting. To go along with the traditional vibe, most of the tables inside are for standing, so I don’t recommend stopping here if you’re looking for a break from walking around. The best way to avoid crowds at El Tigre is to go between 12-2pm or 6-9pm, before all the locals go out for lunch / dinner!

If you’re looking for a great view of the city, make your way to the top floor of the department store Corte Inglés. There is a cafe and restaurant at the top, which has an outdoor seating area. It’s free to go out to the deck and take in the views of the city! 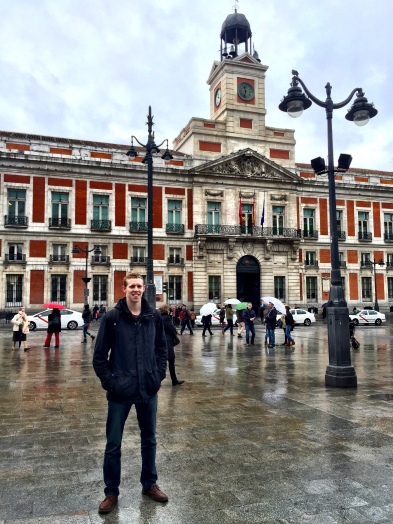 Puerto del Sol is another famous plaza in Madrid that is known for being a meeting spot for locals. It’s home to kilometer 0 – the start of all roads in Spain! Most famously, it is where the televised New Years countdown happens. (Did you know that people in Spain eat 12 grapes within the first minute of the new year for luck?)

This museum focuses on 20th century art and can be found near Atocha Train Station. Pablo Picasso and Salvador Dalí are both featured here. It’s most famous piece of art is Guernica by Picasso.  Tickets cost only 8 euros per person and can be bought at the door or online here. The museum is also free most weeknights from 7-9pm, if you’re looking for an evening activity. 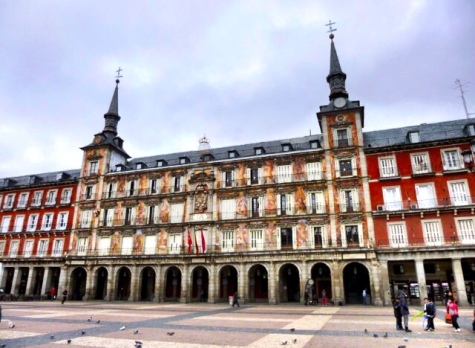 This plaza dates back to the 15th century and was used as the main market for the city. In its history it has seen executions, bullfights and even soccer matches! Today it is most popular for its restaurants and shops, as well as a Christmas Market in December. The architecture is beautiful in this closed off plaza, so I highly recommend taking a walk around or grabbing a bite there!

After exploring Plaza Mayor, you must stop at Chocolateria San Gines to try this popular Spanish dessert. Keep in mind that hot chocolate in Spain is much thicker than we are used to. (It’s practically melted chocolate in a mug). If you are not too hungry, I recommend sharing a hot chocolate with someone since it can be a lot for just one person.

Overall, Madrid is one of those cities you can visit time and time again, and not run out of things to do, see or eat! We hope this post has inspired you to start looking into a Spanish getaway.